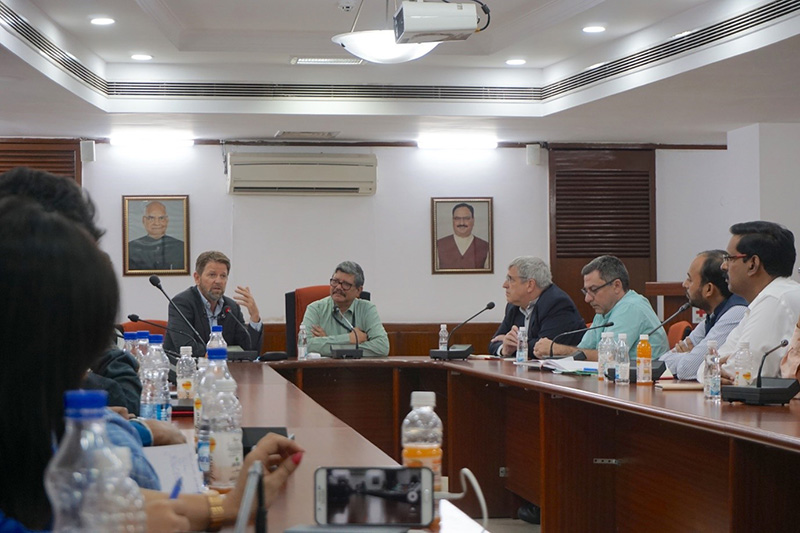 A national workshop on the Family News Service (FNS) or Restoring Family Links (RFL) was  held for the Indian Red Cross Society state branch focal persons to take stock of the ongoing work and discuss ideas for strengthening impact through visibility and partnerships with identified stakeholders.

The four-day workshop, hosted from 19th to 22nd November was conducted by IRCS NHQ and ICRC resource persons. It had an engaging agenda that involved refreshing participants with the key components of FNS, mapping the emerging needs and challenges, particularly in the context of disasters, emergencies, conflicts and migration, and highlighting the need for better communication and promotion of RFL/FNS, including resource mobilization.

The IRCS Strategy 2030 puts emphasis on FNS as a major component of IRCS emergency response. When crisis events separate families, the consequences are deeply traumatizing. Restoring family links through tracing people who are unaccounted-for, exchanging family news using all means of communication, including internet, and clarifying the fate and whereabouts of those who remain missing are major aspects of this service. Vulnerable groups, such as unaccompanied minors, detainees, and migrants get specific attention. Such work can be sensitive, but it is an essential part of the Red Cross Movement’s global humanitarian mandate as a neutral and impartial actor.

The essence of RFL is to alleviate the suffering of people who have no news of their families. One of the many hardships imposed by armed conflicts and other situations of violence, natural and man-made disasters, and migration is the separation of families. Not knowing about the fate, welfare and whereabouts of a loved one is one of the most terrible form of mental and psychological suffering one can endure. Conversely, it brings incommensurable relief when separated family members are reunited or receiving re-assuring news about each other.

The presentations made by the States’ participants highlighted that FNS/RFL needs shall be strengthened further as an essential component of the disaster and humanitarian response, since the IRCS is well-positioned to do so with its nationwide network and a global outreach through the International Red Cross and Red Crescent Movement.

A need was expressed for developing a better understanding and state-level mapping of vulnerabilities and RFL needs, field assessments and action plans to integrate this.

The sessions were conducted in an interactive setting with ample group work keeping the participants engaged. The session on FNS during disasters generated a lot of ideas and discussions around the right tools to be used during disasters and emergencies. Each state branch representative or focal person presented their disaster response mechanism used during emergencies. The session also oriented the participants towards principles guiding the RFL response during emergencies.

The workshop drew from examples and good practices from the state branches, where FNS/RFL is active, and across the globe. This included the work with detention centers for migrants in West Bengal, migration-related scenarios and a hands-on look at the do’s and don’ts, including the filing system, caseload management and some of the online resources at IRCS NHQ and ICRC.

Thematic sessions were held on subjects like unaccompanied and separated children, code of conduct, data protection and communication, promotion and positioning of FNS/RFL.

On the aspect of communication and promotion, it was highlighted that since this work is right at the core of the humanitarian mandate there is a need for developing a communication strategy nationally that is contextualized for each of the states. The outreach needs to leverage the visibility of the service, with credibility and specialization that the IRCS brings.

On the final day of the workshop, a valedictory session was held at the Indian Red Cross Society's National Headquarter with Joint Secretary, IRCS, Dr. Veer Bhushan, Head of the Regional Delegation of ICRC in New Delhi, Jeremy England and Head of IFRC Country Cluster, Mr. Leon Prop congratulating the participants and reaffirming the movement's commitment to this important area of work.