The main approach of implementing livelihood programs is need-based, identified through participatory needs assessment in each State (women headed households in Manipur and J&K, vulnerable communities in Odisha and Maharashtra).

Assessment visit to Odisha by IRCS and ICRC officials
28-29 August, 2019

Under livelihood project, IRCS and ICRC officials visited Laxmipur Block-- Karli, Minapai, Rourlipadar villages and  Semliguda Block-- Khajarkhota,  Dungriguda villages of Odisha on  28 and 29 August, 2019. The purpose of visit was to assess the situation of farmers after the RC assistance given last year in November and to know  whether the SRI technique is being used. The assessment is being done through community meetings in each village and field trip to each farmer.

Total 398 beneficiaries were assisted in these 5 villages. Many beneficiaries are getting benefited from high quality seeds of Green motor ,sunflower and vegetables distributed to them by Red Cross (RC) under the project. From sunflower cultivation, on an average single beneficiary gets 52 ltrs of oil. Farmers are doing line transplantation, which is not SRI.

Worm infestation in maize is very minimal which may have little impact on yield, but will not cause any losses to the farmers. Vegetables are grown organically and previous support has given high yield of brinjal,tomato,chilly, cabbage, Sunflower, carrot,beans, cauliflower,mustard, green motor, moong (green peas) and okra.

For the implementation of SRI technique completely across the village, we see the importance of RC volunteers working more intrinsically in the project. The farmers told the team that after selling of crop of one season, they are able to earn around Rs. 30,000 and even after selling , they have sufficient quantity for their own consumption.

RC next plan is to motivate the farmers to do SRI transplantation so that they cab earn more income. Also, water is the main challenge for the agricultural land in Koraput. This issue will again be taken up with Government authorities by IRCS.

Distribution of seeds of Khariff season—Paddy and varieties of different vegetable seeds (7 types) and farmers training was held in Koraput, Malakngiri,& Kandhamal Districts of Odisha. Farmers were trained on SRI methodology of farming and line transplanting method for transplantation paddy.

This year (2019), IRCS-Odisha State Branch supported 1400 beneficiaries in Livelihood Programme. Each beneficiary was given following variety of seeds: 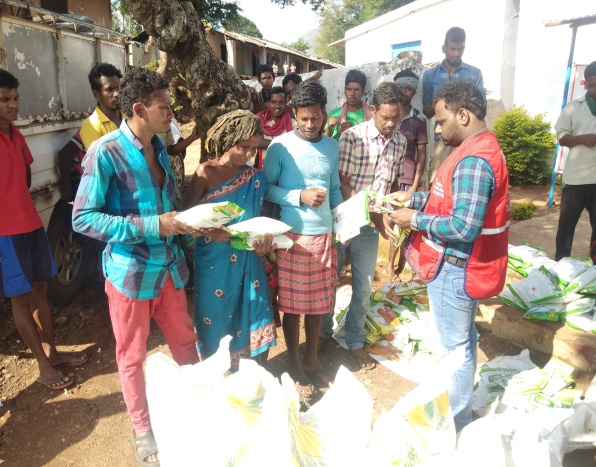 Key findings of Monitoring visit at Manipur by IRCS, ICRC and State Branch officials (13-18 May, 2019)

Current Status of the Livelihood project  in Manipur

It was informed by the beneficiaries themselves that their life has changed as compared to the previous status. People have now found themselves economically at the best status. Overall the current situation of the beneficiaries of the targeted area has improved after Indian Red Cross intervention. [Photo Album]

@IndianRedCross’s #Livelihood project has supported Renu in realizing her inherent potential; earning her livelihood and blossoming into an independent individual.  Today, she is educating both her children & has emerged as a role model for several other #women in her community. And that is not all-she also trains other women and hopes that one day every woman is equipped with knowledge & resources that will make her self-reliant!
Watch video